Gavotte, plinn, andro, does it ring a bell ? These two have been playing them for a few decades. Jean-Luc Thomas and Gab Faure know how to train crowds to the well-dancing. But they go far beyond : they infuse into traditional tunes the accents and rhythms harvested along their travels around the world. Ireland, Brasil, Balkans, Niger, India… The five continents and their earthling brothers’ cultures inspire them.

Their duet adventure freely readapts the dance tunes on every occasion with creativity, mutual listening, reactivity, variations and improvisations. The original compositions born from their musical dialogues will certainly become, someday, traditionals. As in this changing world, one “takes action with their whereabouts, thinks with the world” (Edouard Glissant). With love and humour, such is their signature.

The tempo of the loam

Musician & traveler Jean-Luc Thomas has been since many years engaged in a dual relationship between his traditional Breton roots and reaching out towards other artistic expressions (jazz, contemporary music …) and other traditional cultures (Brazil, Niger, India…)
Between composition and improvisation, he has created a language that he uses essentially to communicate through past and ongoing artistic experiences, involving himself in the diverse adventures that you will discover here.

Free and sensitive soul, Gab Faure became a violinist and a primary school student at the same time, in the late 80′s.

Ten years in classical music school in Caen gave him the taste of musical explorations. The next two decades brought 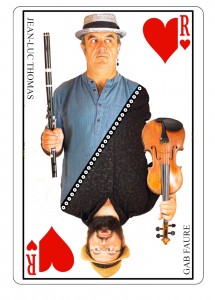 him from Bretagne to Irish pubs, to the oriental banks of Mediterranean Sea – Turkey, Algeria, Israël and more recently to the Balkans. A mix of influences for a rich, unique and always surprising style.